What's Up for March. View Mars at opposition and planet highlights galore. Hello and welcome. I'm Jane Houston Jones at NASA's Jet Propulsion Laboratory in Pasadena, California. Not a week goes by this month when there isn't an amazing planetary view. On March 3 Mars reaches opposition, when it's closest to Earth in its 2-year orbit. This year Mars won't be very close, though. At best, it will be 63 million miles or 112 million kilometers from Earth. At each future opposition until 2018, Mars will be closer to Earth and will appear even more impressive. Even though you'll need a telescope to see any markings -- like the north polar cap -- it's fun to imagine where NASA's Mars landers and rovers are. The Phoenix lander site is not too far from the north pole, while the rovers Spirit and Opportunity are closer to the equator of Mars. NASA's Mars Science Laboratory Curiosity rover will land in Gale Crater in August. On March 5 Mercury reaches its highest altitude in the sunset sky. You'll easily see its phase through a telescope. Have you been watching Jupiter and Venus, the two bright planets in the west? On March 12 and 13 they meet and pass one another. Venus is the brighter of the two, and through a telescope you can see its half-lit phase. Use the moon as a guide to Mars on March 7 late in the evening. And let the moon guide you to Saturn on the 10th and 11th. At sunset on the 25th look for the moon near Jupiter. On the 26th it's near Venus. If you didn't catch Comet Garradd last month, don't worry. It's still putting on a great display this month. Look between the Big and Little Dippers to see it through a telescope, even from your back yard in the city. March 20 is Sun-Earth Day. Many people around the world will celebrate it on or near the spring Equinox: March 19 or 20 with safe solar viewing parties, the only way you should ever look directly at the sun.
at March 06, 2012 No comments:

Introduction to Astrophotography by Cari Letellier 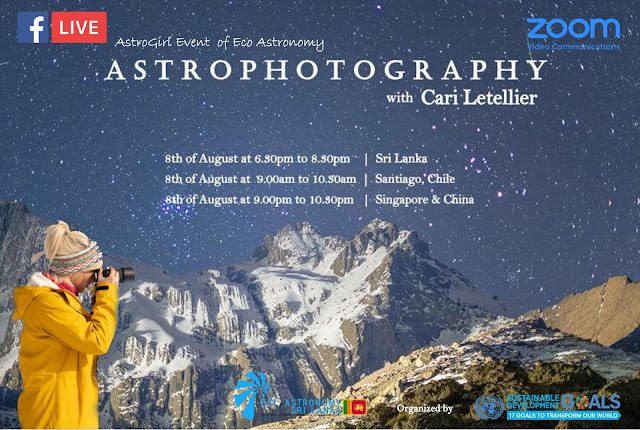